Posted on September 4, 2014 by marriageonamission 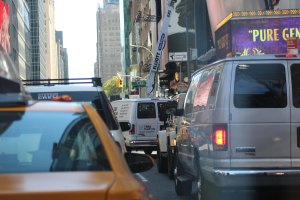 ONE wrong turn. We’re still not sure how it happened so we’ve decided to blame the Scout app. One minute we were heading BY New York toward our destination, and the next minute we were squeezed IN grid-lock traffic IN the heart of the city…as in Times Square. It took as at least an hour to get out of the jam. Such a rookie move after all the times we’ve driven through this area on past missions. What happened? No doubt another reminder from God as we continue the journey.

“Now these things happened to them as an example, and they were written for our instruction, upon whom the ends of the ages have come. Therefore let him who thinks he stands take heed that he does not fall.” 1 Corinthians 10:11-12

This entry was posted in Uncategorized. Bookmark the permalink.

2 Responses to Day 3 – One Wrong Turn